Pre-orders are now available on our next release, Messages From The Damned. This new compilation is a celebration of the label’s first birthday and features tracks from all of the roster bands (past and present) as well as some especially invited guest bands including AGHAST!, PRIMITIVE GRAVEN IMAGE, ZOMBIFIED, BASEMENT TORTURE KILLINGS and ETHERAL. Package deals are available in the store NOW!! note: Package prices on the cd and shirt are only available until 01.11.12, prices then revert to individual prices, so be quick to save money!!! 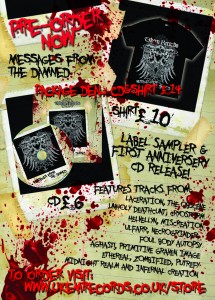 We are pleased to announce that CONSECRATED FLESH have joined the ever growing UKEM Records roster.

Playing supreme black/death metal, the band are a real highlight in the UK underground scene. We will re-release the bands demo in e.p format in 2013, featuring four tracks of outstanding blackened death metal. For fans of Dissection, Ablaze My Sorrow, The Moaning etc. Pure swedish extreme metal worship! Here’s a taste of what to expect from the band!